Sorry about being so late in posting June's Forum but I've been on the road since the Independence Holiday. I still have to post July's Forum and August's session is closing on the 27th. September's forum is now open so please submit a topic question to: sunshine.nomads@gmail.com.

"Mr. Nomad. What was your first car and hold old your you when you started driving?  As a starter car, did it have a lot of options?  I'm starting my sophomore year in high school and trying to convince my Mom how easier it would be on us if I had a car. She is a single mother and works long hours and I am in a lot of activities in school"

Working long hours and chauffeuring someone after hours can be draining. It would be more convenient for you to have access to a vehicle but owning a second car incurs a lot of expense (insurance, fuel, maintenance) and responsibility. Discuss all the factors when making your decision.

I don't think I have any pictures of my original car. It was a 1966 Rambler American Sedan. The car below is a 1964 Rambler Classic that is for sale near me and it looks very similar so I will use it for purposes of illustration.  Let's look at some features:

Q: It looks like a fast car. Was this what they call a muscle car?   Mike Ritter - Cedar Rapids, Iowa

A: No, it was a sensible family sedan and not in the same class as the muscle cars. It had very few pollution control devices or auxiliary devices which tend to rob power from the engine. The automatics of the day also robbed energy and were not as sophisticated as current transmissions.

Q: How old were you when you got your license?  Linda Sutter - Coarsegold, California

Q: So be honest. Was this thing a "Babe Magnet"? Heh-Heh  David Osmund - Provo, Utah

A: No, it had no appeal to the opposite sex. This was not a "cool" car. However,  after being 21 before I owned a car and doing so much walking at college, I was happy just to have transportation. I did not know what a babe magnet was until later when a woman asked me to look after her red convertible Triumph Spitfire for a week and then bring to her in Dallas. Suddenly, I was no longer invisible to the shallow girls. They would wave and ask me for rides, etc. Normally, I was invisible in my car. 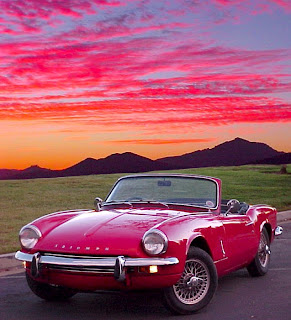 Q: How much did the rambler cost?  Rita Ballance - Baxter, Kansas

A: Fifty dollars. It had sat up in a neighbors yard for a while with a bad transmission. My dad went a junkyard and found a manual transmission for another $35. The transmission worked great between 0-55 and 70+. Between 55 and 70, it vibrated badly.

Q: I like that color. Was yours blue also.  Janet Smith Simone - Ithaca, New York

A: No, mine was a drab brown. One day, a bandito from Galveston told me he had a paint sprayer in his garage and I could use it to repaint he car to give it more appeal. He showed me the right way to spray and how to shadow in the fenders for a cool effect. I went to republic Auto on Broadway and looking through a color catalog, selected a bright lime green. ( I would be invisible no longer!) It stayed that color for a week and then the color morphed into a day-glo yellow. I had to paint the dash flat black to see over the hood on a sunny day.

Q: What happened to the car?  Did you have it long?   Aaron Kintz - Tampa Florida

A: I was sitting a red light in Nacogdoches, Texas on a drizzly winter day and a cop car plowed into the rear of my car. After I settled with the insurance company, I sold it to the bandito. He never drove over 55 in Galveston anyway.
Posted by SunSonSunshine at 9:07 AM