A night search for Kobe 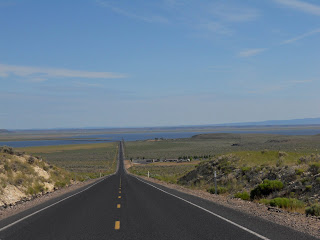 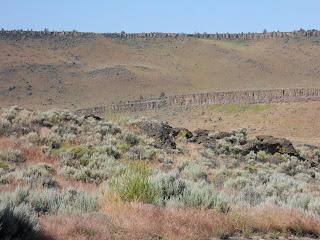 Last night at dusk, Kobe and I were sitting outside listening to the coyotes wail. Then the owners of the park started messing with fire works so we walked down to watch these fountain type fireworks. Kobe was off his leash playing with the owners german shepard.  Then they shot some aerial fireworks that exploded and the dogs vanished. I later saw the owner's dog but not Kobe. We are in Harney County, Or. which has 10,228 square miles and 7700 people. It still is the true old west. I could not find him and drove around the park..not many people here or anywhere. There is a small burg 25 miles to the north called Burns and another settlement called Frenchglen (pop. 12) 35 miles to the south. The owners asked what was up and I told them and they both used ATVs to comb the dark landscape. Kobe had panicked and took off. Jeanette found some hair where he snagged himself going under barb wire but the soil was not suitable for tracking. I drove a few miles up the mountain and a few miles down to the wetlands road and called him for a long time. I looked on foot. Around 11 I drove the wetlands road once more and decided to try the mountain one more time. There was another truck going up the mountain and I saw him brake. I found Kobe and a mile up the road heading downslope toward the camp. I got inside and he had a lot of these crummy grass spears in his fur. Hundreds .I worked on him a couple hours trying to get them all out. He was also cut on his ear from the barbed wire. If you click twice on the above pictures, you will see where I found him and what this terrain looks like,
Posted by SunSonSunshine at 6:06 PM